3 Things I Stopped Doing To Get Healthier 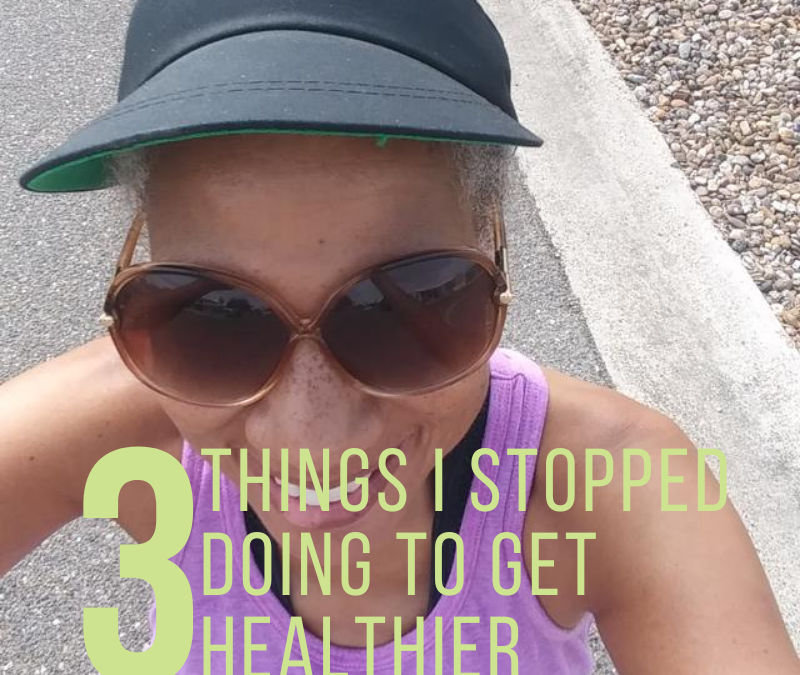 Three things I stopped doing to get healthier.

If you have followed my story for any amount of time, you might already know that I am in recovery from alcohol. I stopped drinking, but honestly, I wasn’t doing it to get healthier–I stopped drinking because it was time to stop drinking.

At the time, I wasn’t even thinking that related to my health journey. When I stopped drinking I started drinking a lot of coffee.

Could coffee be connected to sleep issues and hot flashes?

A lot of coffee, like a pot of coffee a day! Sometimes more depending on how I was feeling, but that was one of the number one things I did to help myself get healthier.

And the reason I stopped drinking the whole pot of coffee was because the coffee was keeping me awake and it was increasing my hot flashes. I tried to convince myself that it didn’t matter and that could not be the real reason, but it truly was tied to the issue of me not sleeping.

So many times, we don’t make sleep a priority.

But honestly, our bodies are made to sleep while it’s dark. We try to humor ourselves and say it doesn’t matter, I’ll just sleep in a little later in the morning.

Friends, once the sun’s coming up, the body wants to wake up. It sees the light and knows it’s time to get up. So trying to convince yourself that it doesn’t matter what time you go to bed–that’s kind of silly!

Do you know what happens when you’re sleeping?

In your gut, your body creates all the feel-good hormones–like serotonin and melatonin naturally when you take yourself to bed and go to sleep. Why do you think parents put their kids to bed at a certain time?

The body has work to do while we’re sleeping. Make sleep a priority, it is important.

You know what I do if I decide that I’m going to stay up later? I still get up at certain time the next morning and get myself back on schedule the next day.

When you decide, you will see the choices clearly

The third thing I did was I stopped making excuses for not exercising.

The body is made for movement. I had a knee injury years ago and I often used it as an excuse as to why I couldn’t do this or I could not do that.

Well, you know what? There are so many different forms of exercise now! Workouts, movements, low impact, high impact, yoga, you name it. You can find something that you like, trust me. There’s something for everybody and I found and tried some different things.

What I found did not impact what was going on with my with my old knee injury and I committed to it.

I did not start out with some major scheme to run a marathon because quite honestly, that’s not what I set out to do. I committed to small increments of time.

I move my body every day and yet, I don’t have a hard workout everyday.

But I do some sort of movement every day. Because the body is made for movement. It’s not made for this sedentary lifestyle.

We have all these jobs that keep us sitting, we stay in front of the computer way too long, We sit in recliners and we lounge around, kicking back because we’re locked in the house. But the thing is, the body was made for movement.

To recap, the three things I stopped doing to get healthier:

1. I stopped drinking a pot of coffee a day.

2. I made sleep a priority.

3. I get my body moving everyday at least 20 minutes a day.

These are three things I did to get healthier and that was just the start! Healthy habits are layered one upon another.

What three things would make a difference for you?

I encourage you to pick at least one and simply get started! The point is to start. Sometimes we don’t want to commit to anything and that’s the problem. We keep giving ourselves excuses and way too much leeway.

What’s ONE thing you could stop to get healthier?